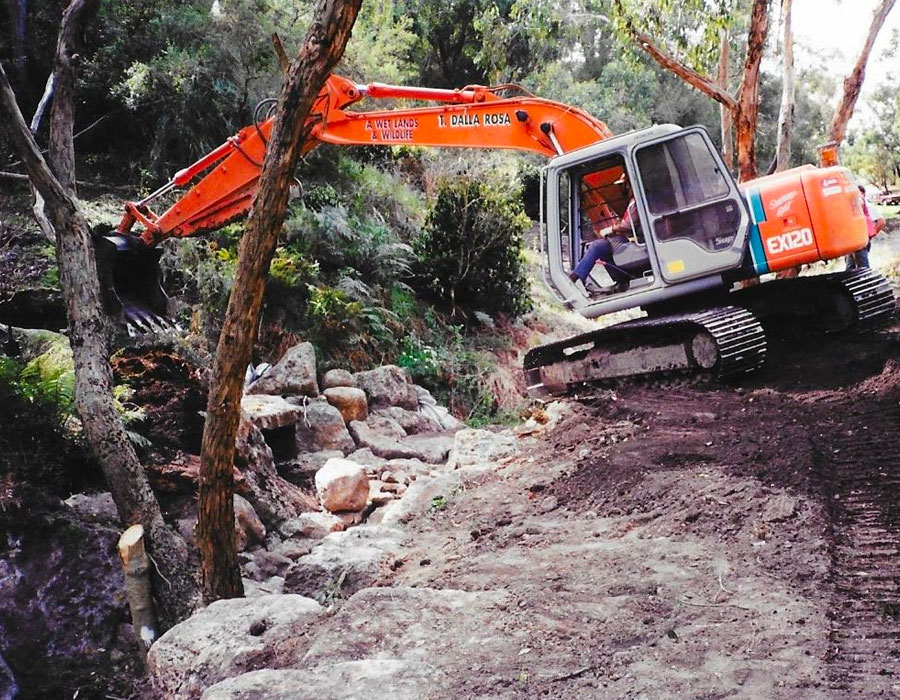 The proposed project attracted much initial comment and discussion. Melbourne Water, the authority responsible for the creek bed from the Bengal Crescent tributary southwards, was supportive and in 1993 it was agreed that Stage 1 be constructed to demonstrate the method and assess the results following high flow rates from winter rains. The creek bed and bank restoration works were undertaken by “Wetland and Wildlife Creations” otherwise known as the “Two Tonys” (Tony Brindley and Tony Della Rosa) who submitted the successful tender for all stages except Stage 4 (wetlands). Stage 2 was undertaken in 1994, while Stage 3 was undertaken in 1995.

Unfortunately, under the then new compulsory competitive tendering process, Monash Council was compelled to accept the lowest tender for Stage 4. This was a decision which was later regretted as the Wetland dam walls failed and after several attempts by the then contractor to remedy the problem Council withheld final payment and the contractor walked away. At the beginning of 2000 the “Two Tonys” were employed to repair the dam walls. This was successfully undertaken.

The honeycomb basalt rockwork in Damper Creek is not indigenous to the area and was sourced from the Victorian Western District. Some other basalt (25%) was sourced from the north of Melbourne. Claystone is the indigenous rock hence the historical brickmaking in the area. The large and flat basalt stones (called “floaters”) were carefully positioned and interlocked into layers to provide strength and preclude the rushing waters from eroding the earth behind the rocks. During construction of the main sewer in the 1970s some large granite rocks were placed in the creek and these were carefully repositioned and integrated with the basalt rock work. The “waterfalls” seen in various places along the creek are not natural and were carefully constructed to slow down the flow and provide some turbulence to aerate the water.

The restoration work continued on later with in another four stages, being the area on the corner of Park Road and High Street Road, Damper Creek East (including the area alongside the Mt Waverley Bowling Club, and the area from Alvie Road to the fence line of the Riversdale Golf Course,) and Bellbird corner. The project was completed with Stage 8 which terminates at the Riversdale Golf Course boundary.

In 2003/4 further restoration work was commenced in Bellbird Corner (Corner High Street Road and Stephensons Road Mt Waverley) by Monash Council. These works were undertaken by the Council with outside contractors without the participation of Melbourne Water which had no funding available for the project at the time. In 2005, when funding became available, Melbourne Water engaged contractors to rebuild the base of the two arms of the East Branch of Damper Creek (between Stephensons Road and High Street Road). Many tons of rocks were dropped into the deep creek bed at that location but they gradually sank into the clay base. High flow rates in this area of the creek illustrate how erosion eventually causes severe problems.