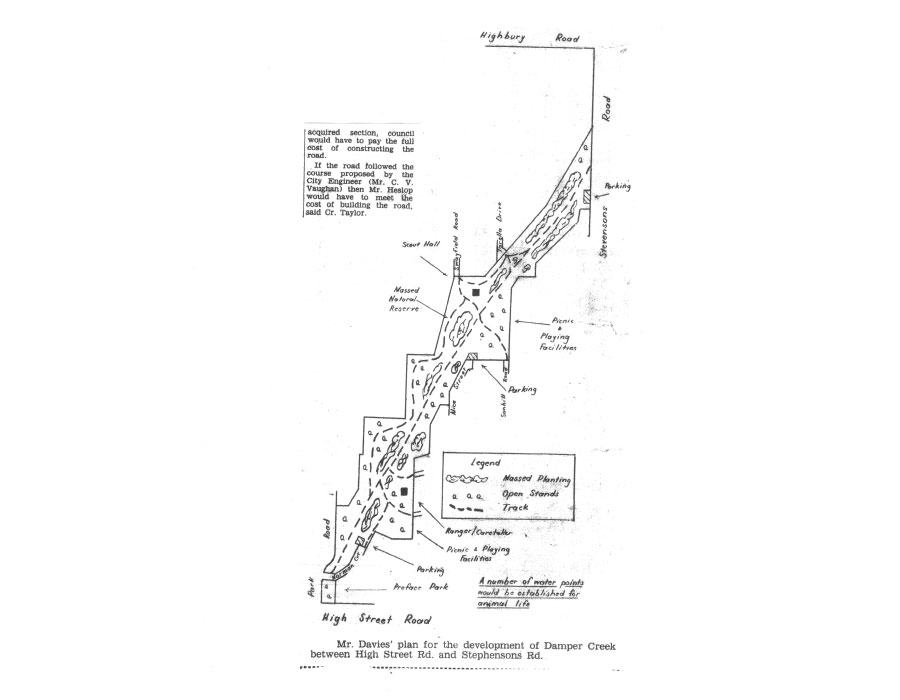 In 1968, Damper Creek and the surrounding bushland were saved from being barrel drained, road construction and residential subdivision.

A meeting was called for residents to attend on Thursday 26 September 1968 at 1 Oak Court, Mt Waverley.

This invitation to residents to attend the meeting in regard to the rezoning of the land**, stated:

“the alarming news that residents in the area will be deprived of natural bushland and recreational parkland. Perhaps you too have been frightened with the news…that Sunhill Road and Alice Street will join Swayfield Road to make way for through traffic between High Street Road and Highbury Road.” The invitation added “that children resident in these areas have become accustomed to the present conditions of traffic. They together with children attending the Waverley North State School (now the Junior campus of Mt Waverley Secondary School) use the roads and the footpaths”.

(**This parcel of land was privately owned with the remainder owned by Melbourne and Metropolitan Board of Works and Waverley Council.)

As a result of this meeting, local residents created the “Damper Creek Conservation and Development Group” (DCCDG) (1968 – 1972) and mounted a campaign against the proposed subdivision of the land and also the proposed linking of Sunhill and Swayfield Roads. Amongst the group members were Barry Counsel, Peter Davies, Frank Leahy, Len Nicholson, Gavin Nisbet, Terry O’Brien, John Ross, Lawrie Ryan, Kevin Ryland, and Cr John Taylor.

The nucleus of that group consisted of members of the Sunhill Social Golf Club which was formed in 1965 – (the tradition in Sunhill Road of welcoming neighbours still carries on with an Annual Street Breakfast, and as the years have gone by, with new residents joining in).

Ultimately the dogged perseverance of DCCDGroup was successful and the development proposals were abandoned. Council negotiated a land deal that enabled Damper Creek Reserve to be created as a public bushland reserve.

In the 1960s, urban development surrounded the Damper Creek “drain” and the area was infested with blackberries, ivy and many other noxious weeds. Willow tree roots damaged the creek bed and the banks were eroded by the ever-increasing volume of stormwater. The area was often used as a dump for the local residents’ garden refuse.

As a result of the work of the Damper Creek Conservation and Development group, and with the assistance of Peter Davies (a town planner who was a member of the DCCDGroup and later was to become a Waverley/Monash Councillor and also the Mayor), a plan for the restoration of the creek including wetland ponds and bushland was developed. This plan was to form the basis for discussion for the creek restoration project undertaken in the 1990’s.

Without the efforts of this conservation group, Damper Creek Reserve would not be the precious native bushland retreat that it now today: a vital flora and fauna reserve, with delightful walking trails that attract visitors from near and far.

In the 1970s the Council proposed the construction of a toilet block within the Reserve but was strongly opposed by local residents. A blue stone toilet block was eventually constructed in Park Road near the corner of High Street Road but was later removed by the Council because of damage and ongoing nefarious activities.